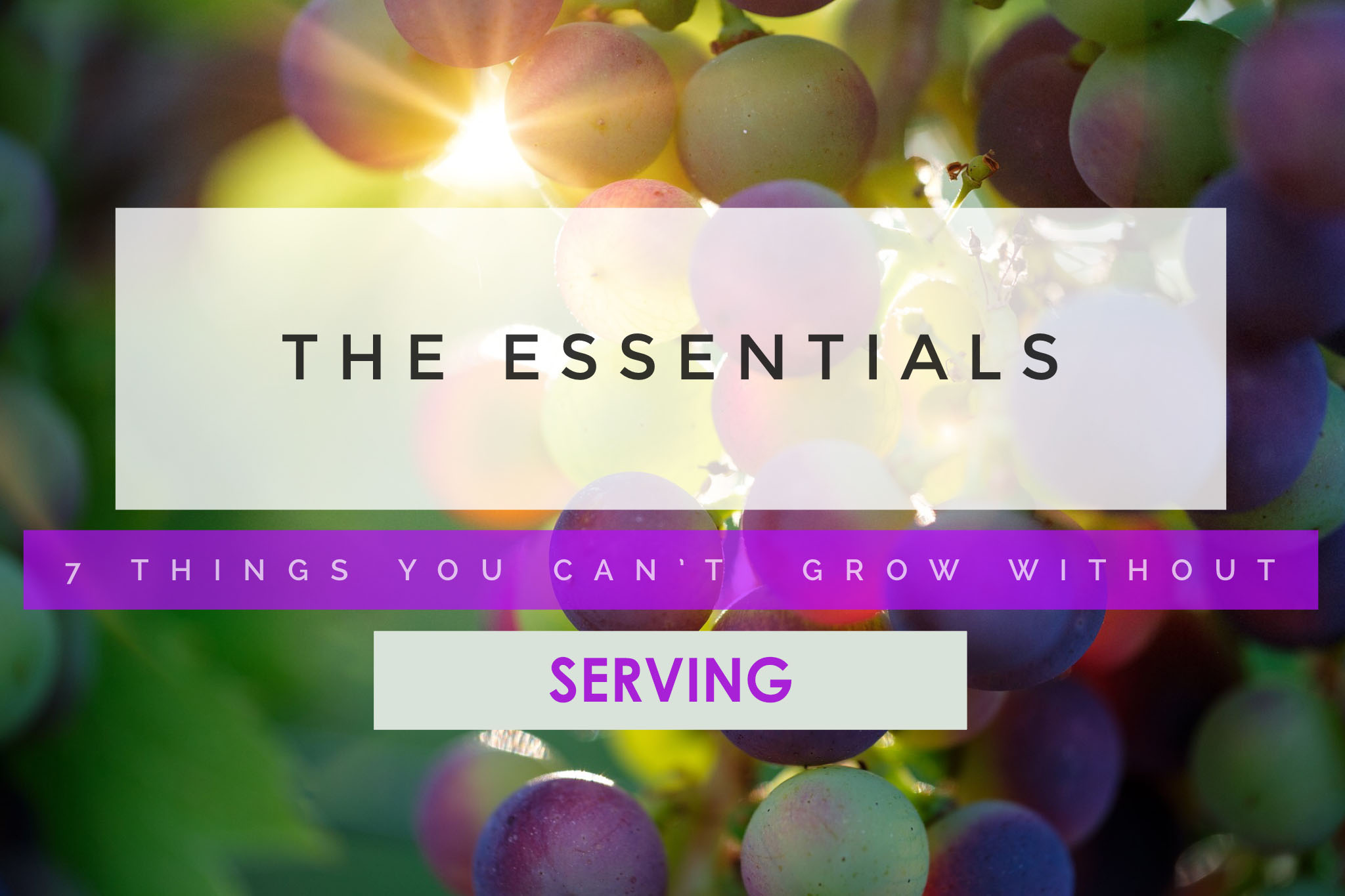 "Everybody can be great because everyone can serve.” Those are the words of Dr. Martin Luther King, Jr.  They remind us of the words of Jesus who declared that he did not come to be served, but to serve, and to give his life a ransom for many (Mk 10:45). On the night before he was crucified, when the weight of the world was on his shoulders, he took a towel and basin and washed the dirty feet of his disciples. By that one simple gesture he showed forever what sort of man he was and what sort of people we should be.

Acts 2:42-47 is what the ideal Christian community looks like in perfect world but we don’t live in a perfect world do we? The early church was no different… Everything is humming along in the early church then the church encounters its first crisis in the real world of people and community.

Acts 6 tells the story of a sudden and unexpected controversy that threatened to rip apart the early church. In seven brief verses Luke describes the problem, the solution, and the very positive result. When we get to the end, we discover that more people are serving the Lord, more people are coming to Christ, and the unity of the church has been restored.

But first the problem: “In those days when the number of disciples was increasing, the Grecian Jews among them complained against the Hebraic Jews because their widows were being overlooked in the daily distribution of food” (Acts 6:1). The problem stemmed from the fact that although the early church was entirely Jewish, it was made up of two different groups of Jews. The Hebraic Jews were Jewish-Christian converts who spoke Aramaic as their main language. They had been born and raised in Israel, knew the customs of the synagogue intimately, and brought their extensive culture with them.

By contrast the Grecian Jews were Jewish-Christian converts who spoke Greek because they had been born and raised outside Israel. When they came to Christ, they brought their Greek-speaking culture with them. This means they probably looked a bit different and certainly acted and sounded different from the Hebrew-speaking Jewish Christians.

This is the first case of racial prejudice in the Christian church. It comes about primarily because the church has grown so fast that it has outstripped its leadership team. In the early days the apostles and their helpers could easily care for everyone in the congregation. As thousands joined the growing movement, it was inevitable that some people (or groups of people) would fall through the cracks.

After all, the Hebrew-speaking widows were from Israel, and perhaps had grown up in or near Jerusalem. They were well-known and had many connections. It’s a natural human impulse to “take care of your own” in times of trouble or shortage. Between Haiti and Home many would choose home. And I think it’s easy for us to dismiss this as a fairly minor problem. It wasn’t. Churches routinely split over issues much less important than this.

So how should the church tackle a problem like this?  If it were us, maybe we would appoint a Food Distribution Task Force to study the matter and report to the Church Council. Or we might call a prayer meeting. Maybe we would end up starting a new church – The Jewish-Christian Greek-speaking church of Jerusalem #1. Maybe we’d start a two-lunch program – the “traditional” Hebrew-speaking lunch at 11:30am and the “contemporary” Greek-speaking lunch at 1pm. If you put the matter in those terms, it certainly seems very relevant for us today.

So then what was their solution? Verses 2-6 tell us how the early church confronted this difficult issue. The solution involves a four-step process.

Step 1: Setting Priorities: First, there was an immediate response. “So the Twelve gathered all the disciples together.” Second, there was a clear statement of priorities.  “It would not be right for us to neglect the ministry of the word of God in order to wait on tables.” Whenever I read those words, they stop me for a moment because at first glance they seem a bit harsh. I can easily imagine that certain people in the church would have said something like this: “Wouldn’t it be great if the apostles who are all Hebrew speaking Jews got together and took over the feeding of the Greek-speaking widows? That would send a powerful and healing message to the congregation bringing them together.

Deep in my soul I feel sure that someone in Jerusalem said or at least thought something like that. After all, what could be better than for the leaders to set the pace in personally solving this problem? It’s so easy, and so tempting, to adopt that strategy.

But it would have been dead wrong because that would actually have caused the apostles to disobey God’s will that had called them to the ministry of the Word and to prayer. Anything that moved them away from that priority — no matter how good or noble or necessary it might be — was actually a diversion from their divine calling.

Obviously, we’ve moved into another era of church life, with pastors like myself now being responsible for ministry budgets, multiple programs, and a mountain of administrative details, not to mention the many personal needs of individuals and families not forgetting our own.

We must not let the good crowd out the best or allow the urgent to push the important off the agenda. But we live in a whirlwind of day to day…so

Step 2: They Made a Plan: But it is well and good for the apostles to be high-minded about their calling, but we’ve got a group of hungry widows on our hands. What are we going to do about them? After all, if they aren’t fed, they won’t be in any mood to listen to the apostles as they minister the Word. We still need a plan to handle this problem.

It begins with congregational involvement: “Brothers, choose seven men from among you.” It continues with a clear statement of qualifications: “known to be full of the Spirit and wisdom.” There is a commitment to definite delegation: “We will turn this responsibility over to them.” And finally a restatement of their own priorities: “and will give our attention to prayer and the ministry of the Word.” Wisely, rather than issuing an edict from on high, they ask the congregation to choose the men who will serve the widows. They wanted seven spiritually-mature men who would immediately have the respect of the church. Once those men were chosen, they could attack the problem as they wished while the apostles focused on their primary calling. All in all, an excellent way to handle a touchy situation.

So Step 3: Finding the Right People: Luke tells us that “This proposal pleased the whole group.” Here is a list of the seven men they chose: “Stephen, a man full of faith and of the Holy Spirit; also Philip, Procorus, Nicanor, Timon, Parmenas, and Nicolas from Antioch, a convert to Judaism.” I listed them because their names are important. Do you know why? All the names are Greek names. Meaning that the congregation chose men from within the Greek-speaking section of the church. These men no doubt knew the widows personally, would have the trust of all the Greek-speaking believers, and would know how to handle any problems that might arise. And then here is the final step in the process.

Step 4: Commissioning the Workers: After the congregation selected the seven men, they were presented to the apostles, who laid their hands on them and prayed for them. This final step is important because it puts the full weight of the 12 apostles behind the seven men. It ensures that the Greek-speaking widows will know that their concerns have been taken seriously at the very highest level. It also sends a message to the congregation that this problem has been dealt with and that the apostles truly want to see the Greek-speaking widows fed every day.

And what was the result? Verse 7 says “So the word of God spread.” Second, there were many new converts: “The number of disciples in Jerusalem spread rapidly.” Third, there were conversions in high places: “And a large number of priests became obedient to the faith.” By God’s grace an interruption that threatened danger became an opportunity for further growth. What are we to learn from this? Let’s wrap up this message by considering four truths for today.

First: The importance of proper priorities in serving God. The apostles understood their calling from the Lord, which is why they refused to personally get involved in feeding the widows. What seems harsh and uncaring was actually best for all concerned. Sometimes leaders must say “no” to the good in order to say “yes” to the best. Keeping the main thing the main thing. In every organization a thousand pressures constantly pull us away from our core concerns. In God’s work we must constantly build everything upon the Word of God and prayer. When we forget that, the entire church suffers.

Second: It is impossible for a few people to do all the work in the local church. The apostles couldn’t do their work and feed the widows too. The same is true in every church today. No pastor and staff can do it all. There are many things that need to be done, and so many willing hands are needed. I can preach and teach and work with the leaders and lead the staff and meet with people and pray for the hurting and visit the hospitals and attend some meetings and answer questions and take phone calls and dream dreams for the future and cast a vision. I can stay plenty busy but no matter how hard I work, I can’t preach and work in the nursery or Sunday School at the same time.

Third: And there is the blessing of many people using their gifts in many ways. This is the flip side of what I’ve just said. In the beginning the widows are going hungry and their friends are upset. Anger threatens the unity of the body. By the end the anger is gone and the widows are fed because the seven men are now serving the Lord and are recognized by the whole congregation. This is precisely how the body of Christ is supposed to function.

Fourth: The value of serving others through practical deeds of kindness. The apostles would have been out of God’s will to wait on tables; the seven men chosen by the congregation were in God’s will when they did what the apostles wouldn’t do. It’s not an either-or proposition. We need leaders who will devote themselves to the Word of God and to prayer, and we need others who will serve the widows and hungry. Both are absolutely necessary for the church to function properly.

In John 12:26 Jesus says Whoever serves me must follow me. And where I am my servant also will be. My Father will honor the one who serves me.  And that is what we need now.