The Essentials: Devoted to Prayer 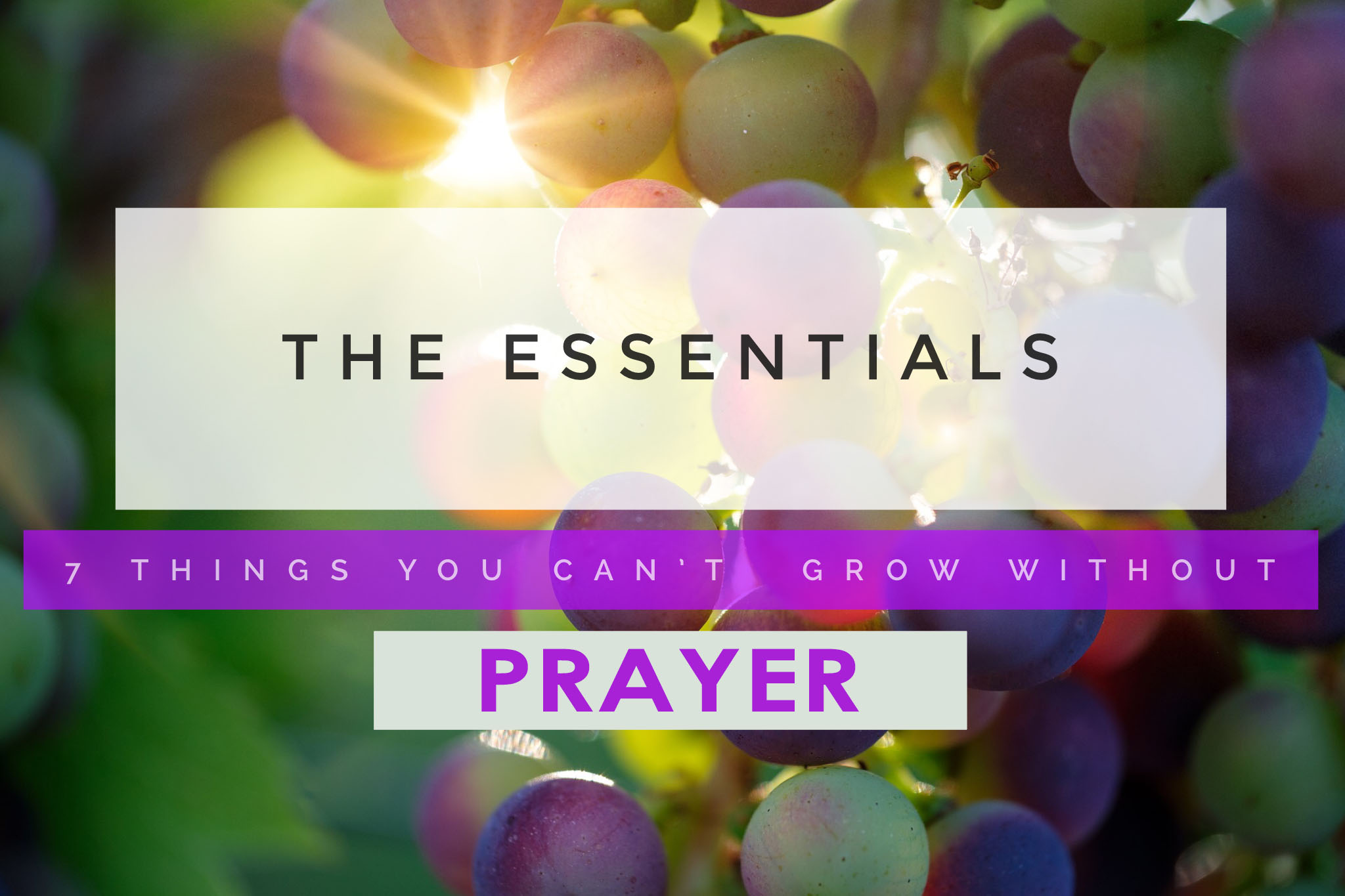 We have begun looking at what the first disciples of Jesus devoted themselves to after hearing and responding  to the gospel and what are the 7 Essentials we can’t grow without. Acts 2:42 reveals that they devoted themselves to the apostles’ teaching, fellowship, the breaking of bread, and prayers. And it is opportunity to ask ourselves what are we devoted to? We have already explored their devotion to fellowship, so now we turn our attention to “prayers,” and this is not the only occasion that the infant church is described as being devoted to prayer.

After Jesus’ ascension before the Holy Spirit even came the Apostles went to the room upstairs where they were staying. They along with the women, Mary Jesus’s mother and his brothers were continually united in prayer one translation says “with one accord [and] were devoting themselves to prayer” (Acts 1:14). Later, the Apostles appointed seven men to oversee the distribution of food to widows so that they could “devote [themselves] to prayer and to the ministry of the word” (Acts 6:4). So, what does it mean to be devoted to prayer?

What we learn from the first century church regarding prayer is that it is intended to be our first response not our last resort. Don’t we all too often consult God after we have attempted to solve things on our own or after we have exhausted all other options? But this was not the way the early church practiced prayer. When Peter pointed out the need to replace Judas as an apostle the church’s first response was not to campaign for candidates or make a pros and cons list of each individual. Instead, their first response was to gather together for prayer.

When Peter was imprisoned, the church’s first response was not to rush to the palace of King Herod and plead for his release nor was it to petition the courts for an appeal. Instead, their first response was to gather together for prayer. The first century church possessed a “seek first” mentality. Before they worried about what they could do they turned the matter over to God to see what God could do.

They sincerely applied Paul’s instructions about prayer in Philippians 4:6, “do not be anxious about anything, but in everything by prayer and supplication with thanksgiving let your requests be made known to God.” Before they worried, before they tried to solve things, they prayed.

Second, I think devotion to prayer means that prayer is a disciplined mindset. Prayer is often associated with a place and a time throughout Scripture. For example, in Acts 3:1 we learn that Peter and John went “up to the temple at the hour of prayer, [which was] the ninth hour” (3:00 p.m.) In Acts 10:30 we find out that Cornelius received his angelic vision when he “was praying in [his] house at the ninth hour.” In Acts 10:9 we read that Peter “went up on the housetop about the sixth hour to pray (12:00 p.m.).

It is also worth noting that when Jesus taught the disciples to pray, He included the phrase “Give us this day our daily bread” (Matthew 6:11). In that little statement, Jesus instructed His disciples to make prayer a daily routine without directly telling them to make prayer a daily routine. The fact that prayer is presented in Scripture as a habitual and timely practice indicates that it should be viewed as a spiritual exercise that we intentionally include into our daily schedule.

But then on the other hand prayer is also described in Scripture as a constant, continual, or timeless activity. For example, Cornelius is described as “a devout man who feared God” and one of the pieces of evidence for his faithfulness to God was the fact that he “prayed continually to God” (Acts 10:1, 2). Throughout Paul’s letters he instructed his readers to “pray without ceasing” (1 Thessalonians 5:16), “be constant in prayer” (Romans 12:12), “[pray] at all times” (Ephesians 6:18), and “continue earnestly in prayer” (Colossians 4:2). The fact that prayer is presented in Scripture as a continual activity indicates that prayer should also be a mindset to which we instinctively turn at a moment’s notice.

Third, Devotion to prayer means that prayer is not viewed as inconsequential. In other words, the first century church did not pray as though they thought their prayers didn’t matter. They prayed with the belief that God was listening to their requests. Consider in Acts 12:1-5 when Peter was imprisoned. The church gathered to pray for his safety and his release. You have to remember that they were in a heightened state of fear because James was executed not long before and the popularity of his death among the Jews had caused Herod to pursue Peter. From the church’s vantage point, it was a real possibility that they would lose Peter as well so they prayed for God to intervene. They did not think the matter was too big for God to handle.

We recognize that God is wiser than us and we may not get the answer we want or feel like it is unanswered. But just because we know that God’s will takes precedence doesn’t mean we should refrain from asking. Remember that throughout the New Testament prayer is presented as a unique privilege. John wrote, “if we ask anything according to his will he hears us. And if we know that he hears us in whatever we ask, we know that we have the requests that we have asked of him” (1 John 5:15-16). And James adds, “The effective prayer of a righteous man can accomplish much” (James 5:16).

The point being made in all these passages is that prayer is powerful, not inconsequential. When we look at the New Testament, we see that there are myriads of scriptures telling us to pray without stopping and continue in prayer. And we could spend more time with me trying to convince us that you need to be devoted to prayer. That prayer is supposed to be a vital connection for you to God. But you know that. But prayer is still a challenge. Prayer is difficult. These are some of the reasons why we can struggle with prayer, neglect prayer, and not be devoted to prayer. So, let’s see how maybe we can overcome the obstacles to a vibrant prayer life.

First, we have to realize and believe that God Wants You To Talk To God. We need to know that God wants us to talk to God. Too often we can think of prayer as something formal rather than a way to talk to our Father, our heavenly parent whatever image you need if your earthly father wasn’t a great mentor for you. The reason we are told to pray is not because this is supposed to be yet another rule we are supposed to follow. We are told to pray because God wants to hear from us.

Having almost finished being a parent for 19 years I feel I understand that better each day. Parents want to hear from their children. But they especially want to hear from their children when they are far away. Hannah is about to start college at Vol State. We are moving here to Nolensville in early July. A good portion of her life is centered in Hendersonville still. Hannah and I have a strong bond and I made a covenant to care for her after my divorce. We are in two peas in a pod.

So her life heads into a new direction and there is always that fear at least for me that our relationship will be left behind with that old life. On my phone Hannah has had a special ringtone for a number of years. It is Under the Sea from The Little Mermaid. I try to stop everything when that ringtone goes off. It does not matter what is happening except apparently worship. Maybe you do that too for your kids. Why do we do that? Because we want to talk to our child who is far away from us in one way or another.

On this day we celebrate the men in our life like our earthly dads...sometimes we fail to communicate with our earthly fathers the way we want…we lose sight…my dad...

God Wants To Answer You. Prayer is not a vain exercise where you are simply getting things off of your chest. God wants to answer our prayers. Listen to what Jesus said about this in Luke 11:5–8: Then Jesus said to them, “Suppose you have a friend, and you go to him at midnight and say, Friend, lend me three loaves of bread; 6 a friend of mine on a journey has come to me, and I have no food to offer him.’ 7 And suppose the one inside answers, ‘Don’t bother me. The door is already locked, and my children and I are in bed. I can’t get up and give you anything.’ 8 I tell you, even though he will not get up and give you the bread because of friendship, yet because of your shameless audacity he will surely get up and give you as much as you need.”

So Jesus begins with a simple story. If you have a friend that you are pestering at midnight, you may not want to act on the request because of the friendship, but you will act because of the audacity displayed. You are going to get what you need simply because your friend wants you to go away. Now Jesus continues with a contrast. 9 “So I say to you: Ask and it will be given to you; seek and you will find; knock and the door will be opened to you. 10 For everyone who asks receives; the one who seeks finds; and to the one who knocks, the door will be opened. 11 “Which of you fathers, if your son asks for a fish, will give him a snake instead? 12 Or if he asks for an egg, will give him a scorpion? 13 If you then, though you are evil, know how to give good gifts to your children, how much more will your Father in heaven give the Holy Spirit to those who ask him!” (Luke 11:9–13 NIV)

Our Father in heaven is going to open the door for you when you knock on it. Our Father is going to give to us what we ask. God wants to answer our prayers. In fact, God wants to bless us with good gifts. If you ask your earthly father for food, is he going to give you something to harm you instead? Even we as humans who are bent toward evil know how to give good gifts. So how much more will our Father in heaven do the same for us?

But with this renewed desire to pray, something is going to happen. You and I are going to pray for things in faith, knowing that God is listening and wants to give to us, but the answer is going to be no. We are going to pray for something and it is not going to happen. It’s a no dawg. We can become depressed and dejected because our Father, who says that He loves us, wants to hear from us, and will answer us, did not give us what we asked for. We think that if God loves us then God is going to answer our prayer and say yes to our requests. Why would God ever deny our requests? Before I answer this, I want us to think about parenting for a moment. Even if you are not a parent, you had parents. Do parents always say yes to their children? When parents say no, does that mean that they do not love their children?

Be devoted to prayer